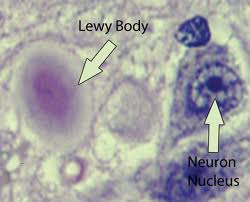 Lewy Body dementia accounts for approximately 10% of all diagnosed cases of dementia in the Canada. The disorder tends to be most prevalent in individuals over the age of 65; however it can occur in younger people as well, although this is less common. The condition is caused by the development of Lewy Bodies which are abnormal deposits of protein which form inside nerve cells in the brain.  Lewy Bodies disrupt the communication of nerve cells.

Individuals with Lewy body dementia will often experience vivid visual hallucinations such as seeing animals or people which are not actually present. Periods of fluctuation in performance are also a common characteristic of Lewy Body dementia; tasks which are performed well one day, or at one point in the day, may be performed more poorly the next day, or a few hours later in the same day. Sleep disturbance is often present in this condition; individuals with Lewy Body dementia may experience vivid dreams and night-time restlessness, accompanied by a tendency to fall asleep in the daytime.

Lewy Body dementia shares characteristics of both Parkinson’s disease and Alzheimer’s disease. Individuals may have some of the motor symptoms which are typical of Parkinson’s disease such as muscle stiffness, trembling of the limbs, a tendency to shuffle when walking, loss of facial expression, and changes in the strength and tone of the voice.

Like individuals with Alzheimer’s disease, individuals with Lewy body dementia frequently have problems with spatial orientation (i.e., knowing where they are, and navigating in their environment) and memory, although the degree of memory dysfunction is not normally as pronounced. Problems with processing and executive functions (i.e., planning and coordinating mentally activities) are prominent features of Lewy Body Dementia.